First day of development of the project’s Political Action Plan 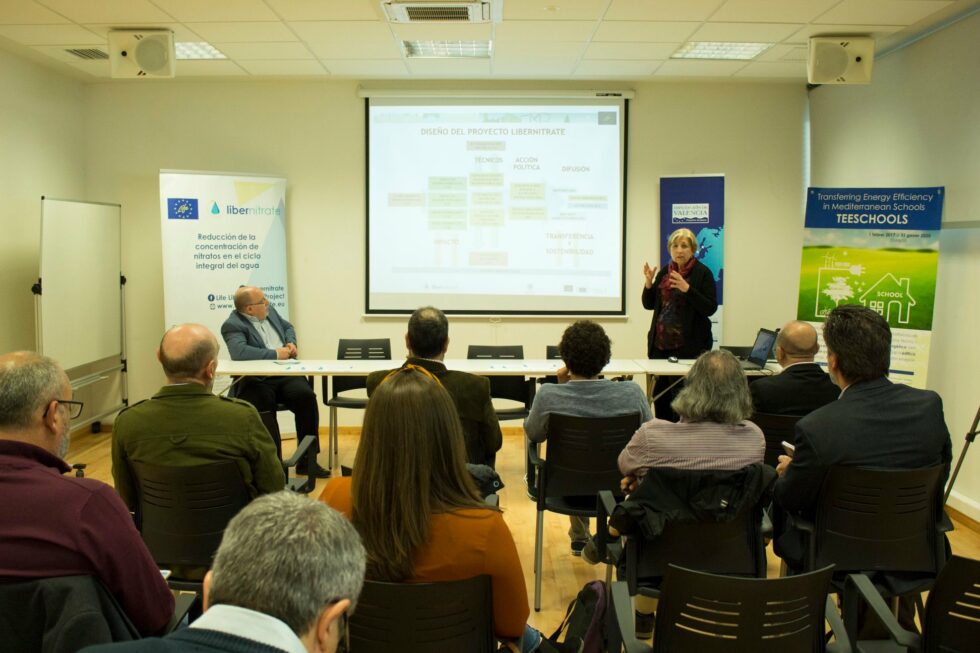 Last Wednesday, February 26th, the first of the six-day conference of the LIFE Libernitrate Political Action Development Plan took place in Algemesi, at the Consorci de la Ribera headquarters. Representatives from each of the project’s partners took part in the conference, presenting each of the project’s technical aspects and continuing along the path already begun last November with a new meeting to continue disseminating the initiative. Thus, we had the presence of Plàcid Mandramany, Coordinator of LIFE Libernitrate from the Consorci de la Ribera, José Morán, the technician responsible for the project from the Unió de Llauradors i Ramaders de la CV, Javier Sanchís from Aguas de Valencia – Global Omnium, as well as Francesc Hernández and Amparo Ribes as those responsible for the project from the Universidad de Valencia and the Universidad Politécnica de Valencia respectively.

In the second part, there was an exchange of views of a political nature with the members of the debate table, in which Ramón Bellido, as representative of the Autonomous Secretariat of Climate Emergency and Ecological Transition of GVA, Óscar Navarro, Mayor Polinyà de Xúquer and Vice President of the Mancomunitat de la Ribera Baixa and Ana Llaurí, Mayor of Llaurí and member of the team of the Provincial Deputy for Territorial Cohesion and European Projects, Carlos Fernández Bielsa, were present. Several political issues were discussed at the table, including the ineffectiveness of the institutions for the implementation of initiatives such as LIFE Libernitrate, and the need for a real commitment by both local and supra-municipal administrations, as well as intermediate governments for a real commitment to all these ecological initiatives. In that sense, it was also bet for the “multilevel governance, in which the public administrations join the technological and environmental companies to make these initiatives a reality.

Finally, the objective of establishing lines of action that can be carried out by the public administrations to reduce the concentration of nitrates in the water cycle, the essence of the project, was once again stressed.
The conference represents the beginning of a round of six meetings around the whole province of Valencia, through its different regions for the dissemination and implementation of the dissemination of the project demanded by the European Union, responsible for co-financing the project.